One of the main appeals of Mediterranean cruises, or any cruise in general, is the ability to see many different places and experience many different cultures, all in the one trip.

The Mediterranean is an amazing part of the world if you are looking to take in many different cities and cultures on a cruise. There is a plethora of coastal regions across multiple countries that will capture your imagination and give you a taste of what Mediterranean Europe has to offer. Below are some of the most popular Mediterranean cruise stops. 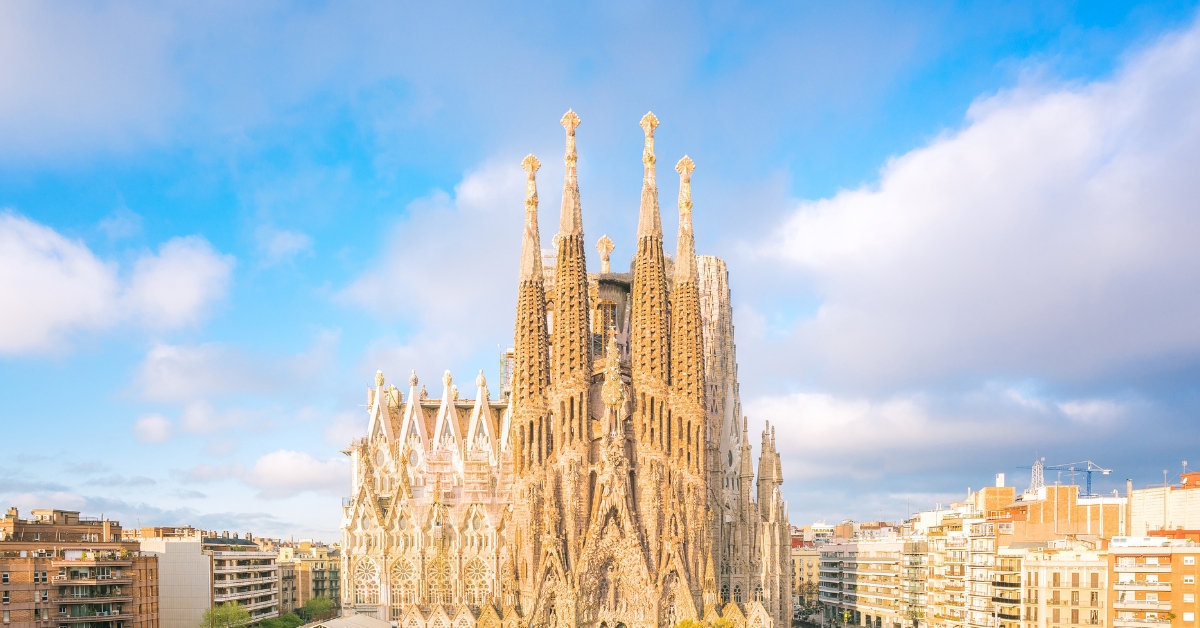 The capital city of the Catalan region of northeastern Spain, Barcelona is a very popular spot on any Mediterranean cruise. It has many tourist attractions including the inimitable La Sagrada Familia cathedral, designed by renowned architect Antoni Gaudi, he himself a native of Catalonia.

If you’re a sports fan, you can visit the Camp Nou, the home stadium of European football giants, F.C. Barcelona, where stadium tours are regularly given, showing of the rich history and success of La Blaugrana.

While exploring the city, you can take a stroll down La Rambla, one of the city’s most famous streets, lined with endless restaurants, bars, cafés, and spearheaded by La Plaça de Catalunya, a tree-lined square that is often filled with various performers and merchants, bringing a real vibrancy to the area.

And, if you’re looking for a change of pace from the multiple tourist activities you can do in the city centre, there are multiple beaches you can go to sit in the sun or go for a swim.

You can visit Barcelona and many other fantastic destinations with this 7-night Mediterranean cruise. 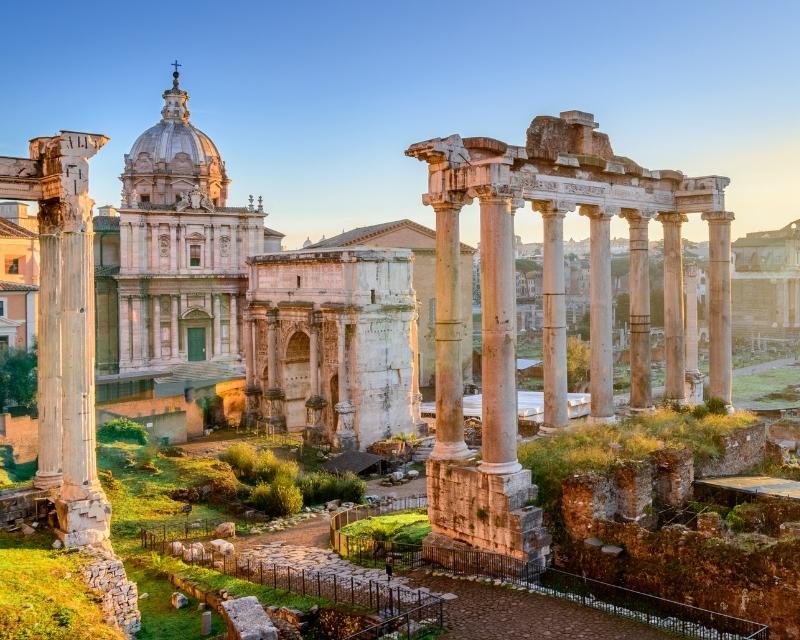 The Eternal City of Rome in the Lazio region of eastern Italy is one of the most historically significant cities in Europe and the world, making it an extremely popular Mediterranean cruise spot. Located on the River Tiber, Rome is steeped in history dating all the way back to the (in)famous Roman Empire.

When it comes to exploring the vast history of the city there are many places you can start, but maybe none better than Il Colosseo, or in English the Colosseum. The ovular amphitheatre is the largest of its kind in the world today and dates all the way back to the 1st Century, estimated to have been completed around 80 AD. The towering structure cannot be missed as you walk the streets of Rome and tours are given regularly for interested visitors.

Rome is also steeped in rich religious history, being the centre of Catholicism. While in the city centre, you can cross over the border into the Vatican City, the smallest country in the world at just 0.4km squared. It is home to Pope Francis and the many dignitaries of the Roman Catholic church. While there, you can visit famous sites such as St. Peter’s Basilica or the Sistine Chapel, where you can enjoy the work of Leonardo Da Vinci on the Chapel’s roof.

Italy is known the world over for its rich culture of food and millions of people visit Rome every year to enjoy the Italian cuisine. In Rome, you will find a pizzeria on almost every street where you can enjoy some of the best and most authentic pizza and pasta in the world. Once you are ready for dessert, you can take a short walk to any of the city’s gelaterias, where you can enjoy rich indulgent ice cream. While enjoying your gelato, you can visit some of the centre’s other attractions, such as the Trevi Fountain or the Pantheon.

Explore Rome and the Greek Islands on this amazing 10-night Mediterranean cruise. 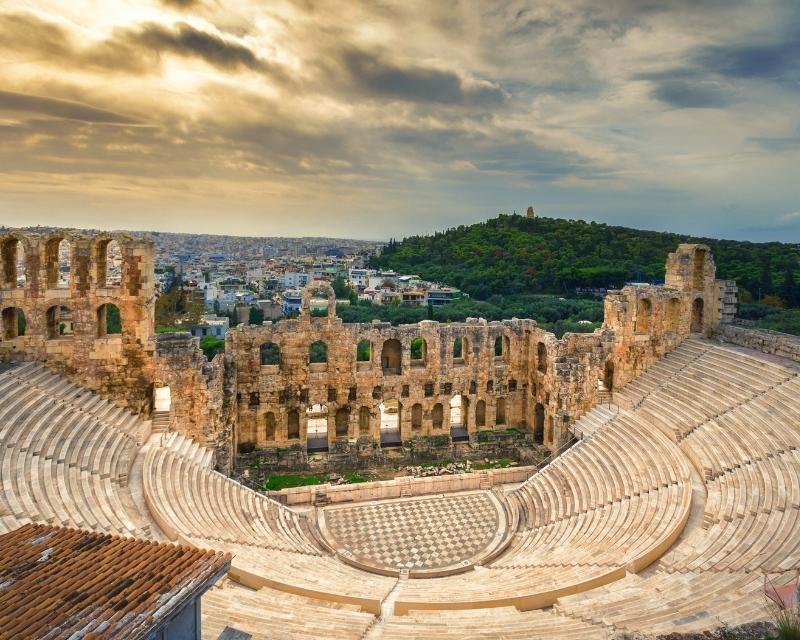 From one of the most historically significant cities in the world to another, and from one ancient civilisation to another, Athens is a very popular Mediterranean cruise spot for those seeking multiple different types of holidays. The capital of Greece, Athens, named after Greek goddess Athena, is the seventh most populous city in the EU. The city is located on Greece’s southeast coast and is one of the oldest cities in the world, with a history spanning approximately 3,400 years.

The “city of the Violet Crown” was the centre of the Ancient Greek empire and, like Rome, is filled with the remnants of an ancient civilisation that will keep history seekers occupied. One of the biggest attractions of the city is the Acropolis of Athens, the ruins of a temple that dates all the way back to the 5th century BC.

As well as being a civilisation of great architects, the Ancient Greeks were also known as great thinkers, bringing many concepts of philosophy into popular thinking. There are many museums and tours that you can do that will teach you about the lives and work of philosophers such as Plato, Aristotle, and Socrates.

If it’s not a history holiday you are looking for, the centre of Athens is not far removed from the Greek coast where you can relax on the beach and enjoy the glistening views of the Mediterranean Sea. And, when you get hungry, you can try any variation of a pita or kebab, for which the Greeks are famous for.

Discover the history and culture of Athens on this fantastic European cruise.

On the Gulf of Lion, at the mouth of the River Rhône, lies the city of Marseille. Founded by Greek travellers around the year 600 BC, Marseille is the oldest city in France, and the second most populous.

Located on the Côte d’Azur, Marseille has many golden beaches that are perfect for an evening stroll either before or after going for a succulent meal in one of the city’s many fine dining options.

One of the city’s major attractions is Basilique Notre-Dame de la Garde, a Catholic Basilica located at highest point of Marseille, overlooking the entire city. The basilica, known colloquially as la Bonne Mère, or the Good Mother, dates back to the mid-19th century and receives over a million visitors yearly from all religious faiths and non-religious visitors alike.

Marseille is also a very popular shopping city with many bespoke boutiques and reputable retail brands located in the 1st, 2nd, 6th, and 7th arrondissements. Due to its location on the Mediterranean Sea, and with a very active port, Marseille is an extremely multicultural city, with influences in the city visible from other southern European countries as well as the Middle East, North Africa, and Asia. This mix of culture adds a sense of vibrancy that is unique to the city. The city is also home to Olympique de Marseille, a football club in Ligue 1 with a history dating back to 1899, whose stadium, Stade Vélodrome, holds a whopping 67,394.

Experience the beauty of Marseille with this Western Mediterranean cruise package.

If you’re in the middle of planning your next holiday, and you’re looking to experience a diverse range of cultures and explore different places in the one trip, then why not consider taking a Mediterranean cruise, and discover some of the incredible cities mentioned above and many more!

Favourite Destination: If I had my way every holiday I go on would be a cruise holiday! They are a fantastic way to see the world from Hawaii and the West Coast, The Caribbean and Bahamas Islands, the wilds of Western Canada and Alaska or the New England and Eastern Canada coastline. Not only will you get to visit a host of fantastic destinations, the cruise ships themselves these days are something of a destination too! With 5* entertainment options, fine dining and fantastic bars and an array of on board activities you might not want to ever leave the ship!

What’s it like onboard the largest cruise ship in the world?